The passing of Robin Williams has impacted all of us. He was one of few actors of our time whose passion and talent made the viewer laugh though his various roles that dealt with loss and love. I owe so much of my childhood to him through the lessons he taught, the laughs he gave, and more importantly, the hope he instilled.

“Please, don’t worry so much. Because in the end, none of us have very long on this Earth. Life is fleeting. And if you’re ever distressed, cast your eyes to the summer sky when the stars are strung across the velvety night. And when a shooting star streaks through the blackness, turning night into day, make a wish and think of me. Make your life spectacular.”

“There’s three things in this world that you need: Respect for all kinds of life, a nice bowel movement on a regular basis and a navy blazer.”

My mom is writing as a guest contributor today. She met Robin in Toronto during the winter of 1977 when he was a guest on a CBC talk show before his Mork and Mindy fame. This is how she remembers him:

“The clothes he is wearing in this photo are the same suspenders and shirt he wore in the series Mork & Mindy. When he performed this night, he played that alien. He had make-shift alien glasses made out of two spoons connecting on the bridge of his nose and holes cut out in the middle for his eyes to see through. I remember when he was on stage thinking to myself, ‘this guy is great, he is really funny.’ He was full of energy and talked so fast and we, the audience, were laughing so hard we could hardly breathe. 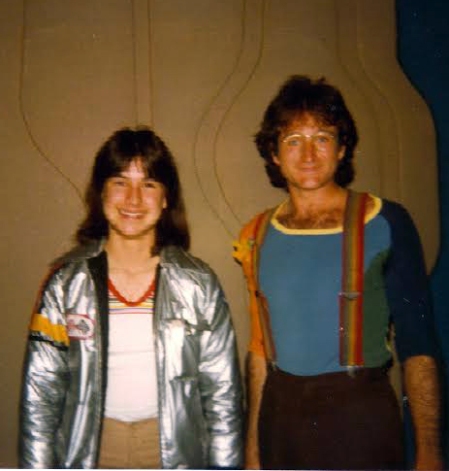 When the show was over, we had just minutes before the guests were taken off of the set. I was the only one in the audience who went directly to him and found him to be shy and quiet. He said he liked my alien jacket and we both laughed. I asked for his autograph and took a photo with him, and I’m glad I did. I still have that autograph and photo in my room.

Robin has always been a favourite actor/comedian of mine and I would enjoy any performance he was in. He was kind enough to say hello to that young girl in this photo and to this day, I still look up to him. That young girl inside this older body still smiles when she sees images or performance of his. The world is a sadder place today, when the person who made the world smile and laugh, has fallen.”